It was a good while back, over three years, but all the same I’m going to try and summons the key ingredients of that long ride from the depths of my distorted memory. Why?  Well as time goes on my condensed memory of the event is just rain, more rain, tiredness, confusion and an out of time finish. All were very real elements but it didn’t actually seem that bad at the time or just after – then it was about the satisfaction of ploughing on to completion despite the foul conditions.  About finding I’d maybe bitten off more than I could chew, what with the weather and the decision to ride fixed, but getting it down anyway!

I’d gone for the Baxter Tours option with coach there and back, hotel etc to make things simple.  This didn’t prove to be such a great idea though what with having to get a bike bag and travelling to meet the coach and those endless hours of sitting in the damn thing. The hotel tried to feed me and two other vegetarians veal and rice despite us being assured there would be suitable catering.

Anyway the vibe was good as thousands of us gathered in the cattle pens in the rain at 22:00 Monday waiting well over an hour as our turn for the speech (in French), the band and the off. I think the rain stopped for a while but the tarmac was drenched and the close formation ride out of St Quentin in the dark was hairy but exhilarating.

One problem with a late evening start is you lose a night sleep straight away.  There were controls and stops for food and coffee and rain but mostly on and on till I hit Loudeac, about 440km, for my first sleep as planned.  Loudeac was like a refugee camp, we all kept crowding in but no one wanted to leave in the worsening rain.  I found a free table outside under an awning to lie on and tried to sleep, soon enough I discovered why it had been unoccupied, a compressor right by it auto started every 20 minutes or so. 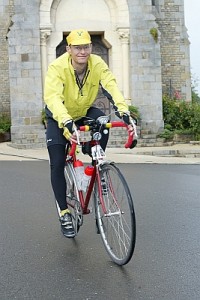 I gave up on the broken sleep and decided to flip my wheel over in the gloom of morning and ride the next section in 64″ rather than the slightly over ambitious 71″ I’d been riding.  Seems having perfectly horizontal track ends fitted when I’d had a frame respray hadn’t been such a good idea though as the rearward movement of the wheel meant I had to realign the brakes so they didn’t touch the tyre.  The whole palaver wasted well over an hour of my time cushion.  Still over a third of the ride done and I was on my way again.

I was hearing at the next controls that riders were packing by the dozen. People had hung on and on waiting for a break in the weather then left themselves no time buffer for sleep and respite from the continuing intermittent rain and wind. Despite what hope and encouragement the many brilliant supporters and controllers offered many riders had had enough and were giving up, in some case, particularly the less well prepared, this was the only sensible decision.

Not me though, too stubborn, I reached Brest during a lul in the gloom and enjoyed a beer and some time off the bike. Then it was basically just a matter of retracing 600k back to the outskirts of Paris. I was tired though and kept breaking the journey with visits to local establishments for coffee, chips and brie sandwich.  At the next control I was told there had been an extra 2 hours added to the control finishing times but we would have to make it up before the finish.  Like a pauper already up to his eyes in debt I grabbed the offering and spend the 2 hours trying but failing to get some sleep.

Somewhere, earlier in the ride maybe, an endless cold and wet night had been broken by a French oasis. A warm cafe set out for us in a village square with tables under weatherproof awnings and chips and coffee. So good!

The second night was a mess, I couldn’t sleep in the noise and light but had foolishly agreed to set off with another English chap who I then couldn’t find as he was asleep in some corner. I lost another couple of hours (though I ate a lot while waiting) before we set off late with another Englander who was suffering so badly from failed neck muscles he couldn’t hold his head up. The bloke I’d originally waited for couldn’t go as slow as me so was sent off ahead alone, the chap with the bad neck was later prevented from continuing by medics he sought help from – quite rightly in this case I think. Another slow day with lots of rain and cafes.

There were many good companions along the way, I think somewhere around here I spent time chatting to a Canadian riding a bike with a bamboo frame.  A pleasant few hours spent riding with US fixed rider Emily and her companions, most of us chatting the nonsense of the knackered.

The last night was desolate. We’d been on the limits at the last control and they’d made a point of not letting us sleep as chairs and table were packed away around us, I was quietly angry at the time but in retrospect I think they just wanted to give us every reason to get back on those bikes.  The rain worsened making conditions as bad as on the outward leg and not offering much chance for us to earn back our 2 hour loan.  Unusually I’d been riding in spectacles to avoid the need to change contact lenses with knackered, grubby fingers. Rain, glasses and car headlights don’t mix well with a brain diminished by exhaustion so eventually I stuck the contacts in anyway – my most (only) sensible decision of the ride. My tiredness had reached the point where every now and then I would just get off the bike, lean against it and doze a few minutes. It was too wet to sit or lie down.

A rider passed me then veered over to the other side of the road and fell off, fortunately uninjured. He was by no means the last rider I saw come a cropper. I passed a group going so slow they surely couldn’t be upright. I looked back and they’d gone, maybe they’d never been there, I saw many things that weren’t. People zigzagged from one side of the road to the other, I saw a group heading the wrong direction down the road they were that disorientated, I waved them round. I saw a hay barn behind a hedge in the dawn and dragged myself in for the best sleep of the ride, over an hour solid.

At the final control an English bloke with a camera turned out to be Matt’s dad. I’d not seen Matt for 24hrs but he’d been looking ok then. I sat and ate with a fresh looking Anne and Dave of the Cardiff Byways, they were comfortably on track for finishing in their 84hr limit having set off at 5am Tuesday. I wasn’t going to finish in 90hrs, no way, but surely they would let us keep the extra 2 hrs, they were many behind me. 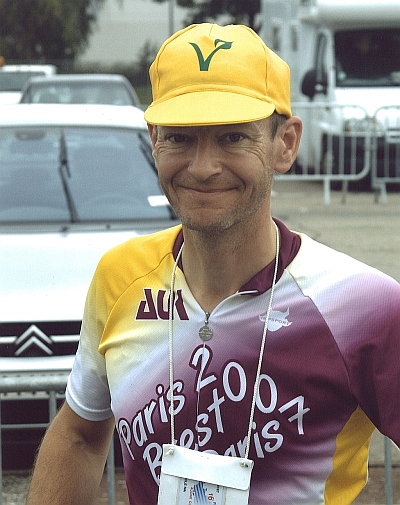 At Dreux (I think)

Onwards! The weather cleared a bit, there was a very long, boring, agricultural bit. I gave myself a target to stop me having so many little breaks. I might not complete the ride in 90hrs but I would at least cover the nominal 1200k!  And I did 🙂 Then I immediately had a vital nap in a field.

Civilization appeared with it’s traffic and junctions. I’d been navigating by the GPS rather than the direction arrows most of the way round but back in town the arrows were useful. People still bothered to cheer us – even us tail enders – they’re great the French!

Another fixed gear rider appeared beside me, he turned out to be Seattle rider Duane Wright, a fellow vegetarian. We were very happy, it was too near the finish not to be, the days of struggle would just make the imminent arrivée sweeter. We touched wheels in our tired clumsiness but didn’t go down. We approached the finish to find lots of fresh, strong youngsters were just finishing the youth version where they ride the entire course but over 2 weeks with night stops.  So us two knackered fixers joined them round the huge roundabout at the finish and shared their applause.

Then a final stamp and hand in the card, much confusion as to whether our overtime rides would be validated eventually resulting in the poor finish controller saying he didn’t know yet. Then a free beer and a good feed!

Later, back home, the results arrived. I finished in 91hrs 43min but this wasn’t quite good enough so I was awarded an Hors Délai- I was pleased to get this acknowledgement of my efforts rather than the expected DNF. I had an 85 hour finish in the 1999 PBP so didn’t feel let down by the uncertainty and confusion in the way that some other HDs did. I reckon I spent about 62hrs on the bike leaving almost 30hrs ‘rest’ yet less than 4hrs total sleep. I was pleased to see Duane got awarded a 90hr finish as he had set out in a later group than me, about 60 riders got in with an extra allowance of 1hr plus 30mins ‘queuing time’ for some, they were all recorded as 90hrs. In all 3603 of the 5160 starters had their rides validated, 127 of us were Hors Délai, the remaining 1430, 27%, were DNF.