Let me just make this clear – I did not run in the British Ultra Fest, these people take running so far a marathon starts to look like a pre-breakfast jog.

The 2013 British Ultra Fest comprises 3 races – a 6 day, a 48 hour and a 24 hour. The participants run or walk round a 400 metre track completing as many laps as they can in the allotted time, they change direction every 6 hours. Time spent sleeping or stopping to eat is time lost on the track so kept to a minimum while ensuring you can complete. It was happening just down the road from me at Radley School and Greek vegan runner Mitso (Demetrios) Kehayioglou was taking part in the 6 day so I thought I’d cycle down there to see what it was all about and offer support to Mitso.

This being the start of the 6th day I was sort of expecting something resembling the zombie apocalypse with 6 day runners stumbling about while the 24 hour guys, who were only just starting, charged past them. Mostly though they seemed happily walking round, chatting in some cases, eating in others, still running quite a bit, pain and discomfort hardly registering on their faces. I positioned myself to take a few photos, there were not many spectators so I could pick my place by the track, I spotted Mitso and called his name. 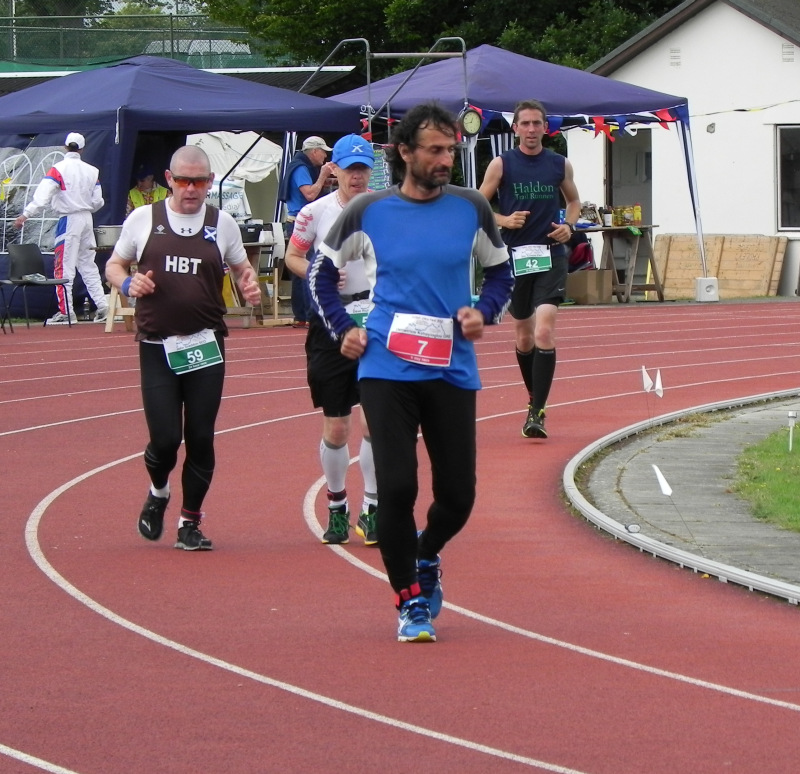 Runners are only supposed to leave and regain the track at a particular point and they mustn’t accept pace from others so I took a few photos then went to the refreshment area where Mitso met me and we chatted for a few minutes. His knee was swollen and sore, making every track corner difficult, so he was slowing a bit to make sure he’d finish. I asked if he needed anything, I’d thrown some stuff in the pannier including eats and dry socks, but he had it all planned with assistance from his partner and a tent. I guess you have to get all the preparation spot on with this sort of thing. The official caters were Veggies, a vegan group from Nottingham, so no issues with getting good food. 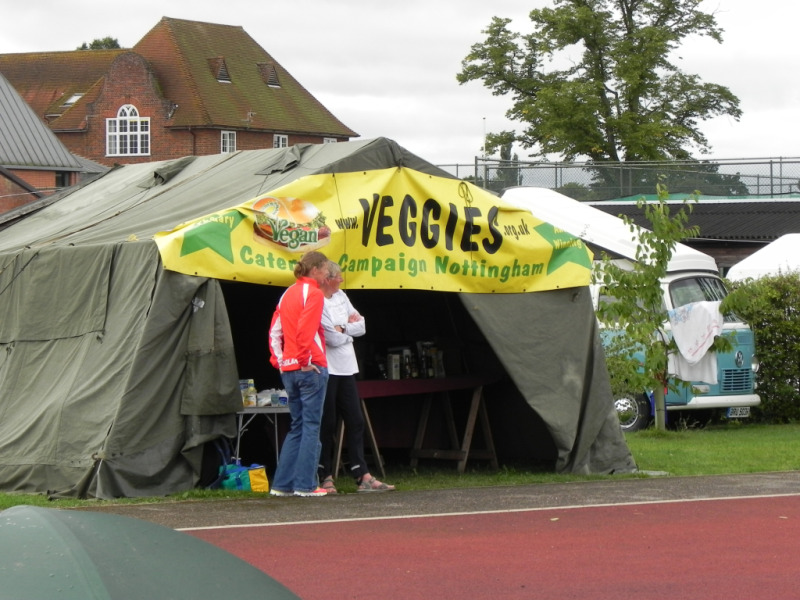 I let Mitso carry on, one more mile then time for a rest he said which turned out to be fortuitous I think as it started raining when I was on my way home 15 minutes later. I took a few more photos, spotted Paul Brackett amongst the 24 hour runners and gave him a shout. The 6 day people would walk off the course, grab sustenance from their support crews or the table by Veggies, then carry on round often spooning food into their mouths as they went. Christian Ritella from Sweden appeared to be refuelling with a bottle of beer – and why not! 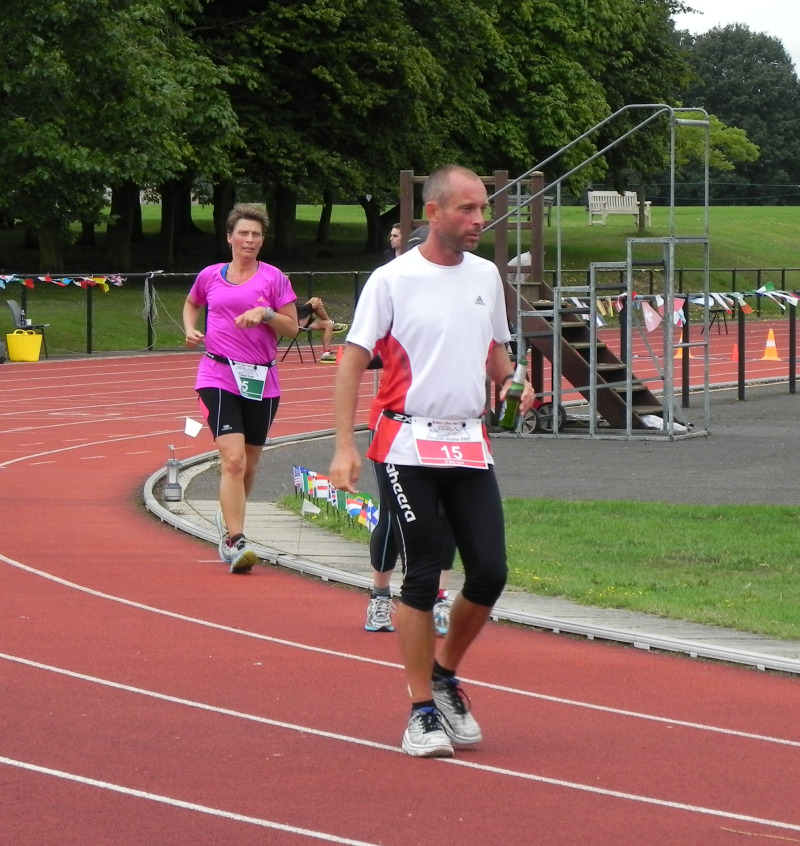 Having just set out back home, almost at the point where the entrance track through the woods meets the road, I met an American 6 day competitor who I later identified as Bill Heldenbrand who had just set a new 48 hour record for his M65 category. I gave him a nod, he smiled and said he was a bit bored of going round and round the track so thought he’d take a walk and see what the countryside was like. These people are quite special, they seemed to have achieved contentment with their repetitive efforts. Nothing like the soggy, undisciplined, wrecks we must have appeared after nearly 4 days at the back end of the wet 2007 Paris Brest Paris.

More photos on Flickr here. The winner, Frenchman Didier Sessegolo, totalled 533.6 miles. Mitso did 367.9. I hope they are all recovering well and enjoying a rest! 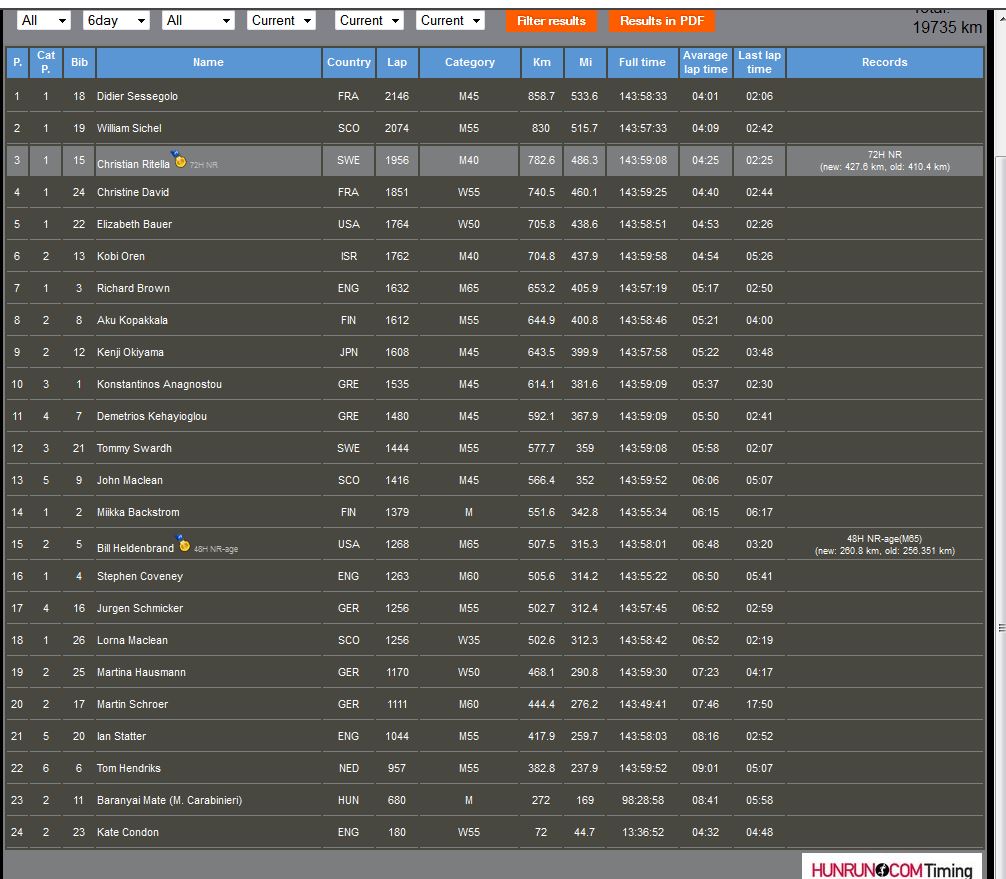