I’d entered the Brighton Half an age ago as it seemed there was going to be a big vegan presence. Rubbish that I may have been recently, I’d used this as a focus for some training and – while my target of scraping in under 2 hours seemed uninspired for a distance I could run in 1:45 2 years ago – it was a bit of a boost to be reminded by my ‘purple’ start race number that when I’d entered I’d apparently put 2:00 – 2:15 as my expected time.

As a ‘tune-up’ race (well alright because I couldn’t resist it) I did a orienteering event up Shotover the day before. Went for ‘light green’ this time and while I took a long time again – 1:06:36 for a nominal 2.8k turned into an actual 5k – I made an attempt to do it properly and managed 9th out of 11 finishers with 3 disqualified. 25 minutes ‘stopped’ time according to my Garmin so I obviously need to learn to think quicker!

So Shotover done with mid-afternoon I was off to Littlehampton where I spent a comfy night in the Travelodge before scraping unexpected ice off the car and driving the last few miles to Brighton where I caught the special bus to the start by the seafront. Thousands of runners milling about, I bumped into Matt Woodman and Peter Simpson then deposited my bag before heading off to the ‘purple’ start area – after a bit of a warm-up we were off.

Plan was to start easy and try to keep my miles under 9 minutes throughout. This ought to be easy but I’d struggled to keep under 10 minute miles towards the end of the 13 mile training run I’d done a couple of weeks before and had been absolutely shattered for the rest of the day – it had felt more like I’d just run a marathon. Anyway I followed the convenient 2 hour paceman for a bit – entertained by his obvious urge to run a bit faster tempered by regular checks of his watch to slow down a bit. After a couple of miles I passed him though and was glad to find a bit of space appearing round me as the field opened up a little bit.

Up a long but steady slope for a mile or so watching the faster people descending the closed road in the opposite direction. A great drum band beating out a rhythm – Stix – then our turn to descend with a view of those behind. I had a half bottle of Lucozade at the 3 mile station and again at 6, it had turned into a beautiful sunny morning and I was working up a good sweat for maybe the first time this year. 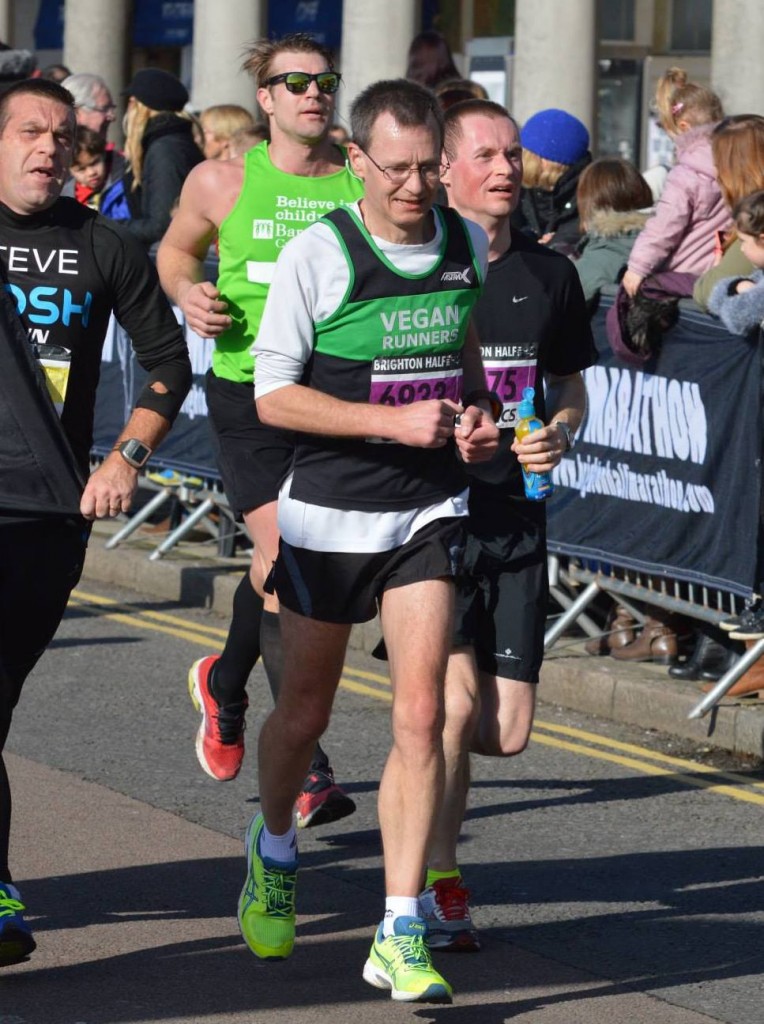 Tiring a bit around mile 8 I still managed to maintain sub-9s with the help of my Garmin. I felt a little queasy from the Lucozade so washed a gel down with a bottle of water at the 10 mile station which was just at the point where we turned back east and followed the promenade back to the finish. I was seeing a chance of finishing in 1:55 and come the last mile pushed as best I could speeding up for a fast (for me) finish but not quite – 1:55:12 3047th of 6924 finishers chip time – pleased with that though and a day later I feel ok and no injuries 🙂

Afterwards I met up with some of the 15 odd other – mostly much faster – vegan participants, many of them VRUK members. Despite my earlier queasiness a chunk of V-Bites carrot cake and a hazelnut latte went down a treat!