The best I could hope for at this year’s White Horse Half was to get in under 1:55 and after an outburst of moaning from my frozen shoulder over the last 10 days I wasn’t at all sure I could even manage that. I’d DNS’d the OX5 Run the previous weekend as I couldn’t face the ride out to Woodstock with my shoulder nagging away and stealing my sleep – the novelty of it not being non-stop painful long ago wore off. About time it just went away and left me alone!

Really not so bad when I arrived in Grove on Sunday morning though and I had a couple of ibuprofen to make sure then headed off to the start venue to dump my bag then a 5 minute wander to the start line. Despite thinking I’d run it last year I couldn’t really picture the layout which might have been because I’d not actually run it since 2011 and my memory is stuffed. I said hello to Maria who was marshalling and nodded to a few familiar faces then positioning myself about halfway down the field and we were off!

The first mile is a bit downhill if anything but I kept to the plan and resisted the temptation to chase the few runners passing me and was happy to keep the pace at 8:30 minute miles for the first half without feeling I’d overdone it. The country lanes were pleasant and the weather nice but the combination of my Asics Skyspeed ‘fast’ shoes and the farmer’s efforts to muck-spread on the tarmac made it all a bit slippery. I vaguely wondered if I was skating on residue left by the rain washing the previous day’s industrial smog out the air but this seems a bit far fetched.

About mile 7 we turned into the wind and I slowed a little. Not for the first time I managed to persuade myself I was on for a much better time than planned, 5 more miles 9 minute mileing was only 45 minutes! Pity there was 6 more miles to run I realised with a thud. I spotted Barry Cornelius who seems to be more often wielding a camera than running recently. He pointed said camera at me – later I followed a facebook post to his oxonraces website which turns out to be a fine resource. 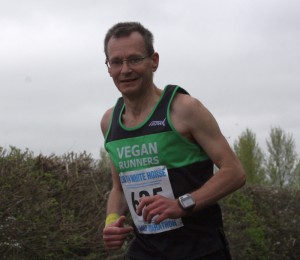 Mile 10 was difficult. There was supposed to be a water station somewhere about here so I ate the gel I was carrying and tried to keep up the pace as we turned into an increasingly strong wind and a gentle uphill. My Garmin let me know I was slowing to 9:30 pace yet I was pushing as hard as I dared. Too much of this and the 1:55 target wasn’t going to happen. The road turned downwards and my pace went upwards, the water station appeared, then we were back in Denchworth to turn south for the final couple of miles.

Knackered now the railway bridge was a challenge and mile 12 seemed to have it in for me as a sharp pain on top of my right foot caused me to stop twice to search for a stone or insect or whatever before discovering the tongue of my shoe had worked it’s way round allowing the edge to rub me up a sore bit. I adjusted it and tried to pick up the pace a bit for the last mile managing to regain a couple of the places I had lost stopping.

End in sight and Maria encouraging me to sprint for the line which I pointed out I thought I was already doing. 1:54:16 323rd of 485 so no records broken but I hit my target and was about 3 minutes faster than when I ran this race in 2004 as my 1st half marathon – I was much fitter then but didn’t have a clue how to pace myself. 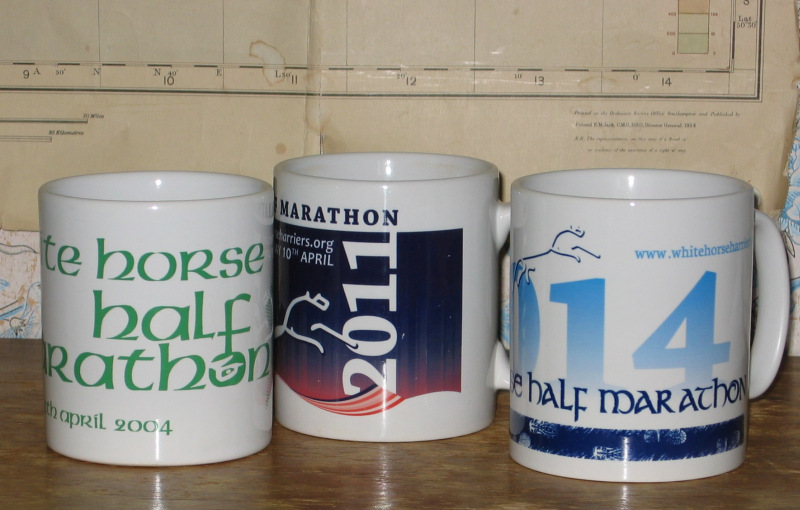