It’s about 6 years since we had our solar panels fitted so to get an overview I’ve used the monthly readings to compile a couple of graphs to see how they’re performing. You can click the graph to view a bigger version.

Firstly generation in kilowatt hours by month shows how the peak summer months generate about 6 times the power of the dullest winter months. 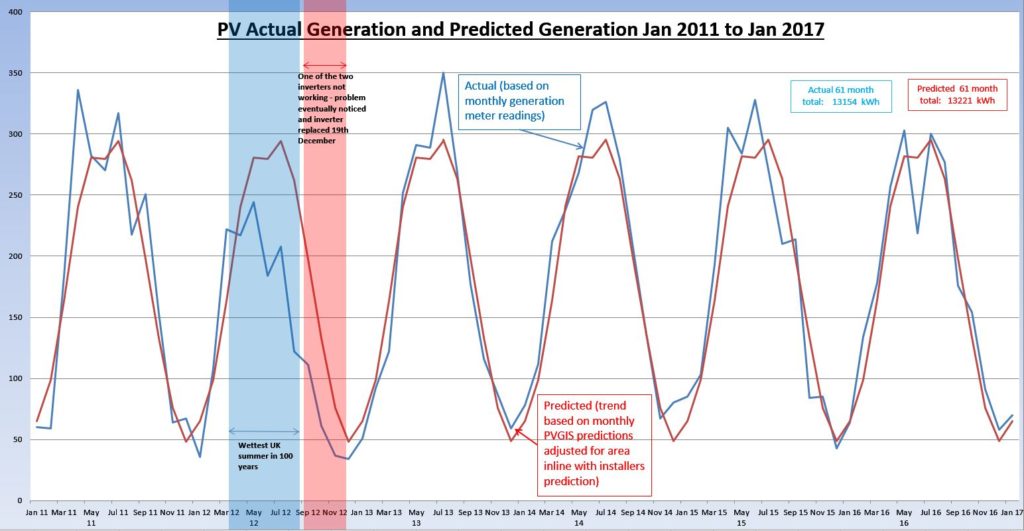 I’m surprised how consistent the monthly output is year to year. Leaving aside the exceptionally wet summer of 2012 which coincided with one of our inverters failing, a halving of output I failed to spot for several months, the degree of consistency gives the impression that sunshine per month, or season, averages out quite well year on year despite it often feeling like a particularly wet, or sunny, time when we are living through it!

Next yearly total against predicted total which seems to show that we met, or exceeded, predictions all years except that best forgotten 2012. Doing the sums it seems that the 2012 shortfall has almost been made good by the several years we have exceeded predictions, we are about 70 kWh short. We can expect efficiency to diminish a little over the years so I guess generating slightly over predictions is to be expected these early years. 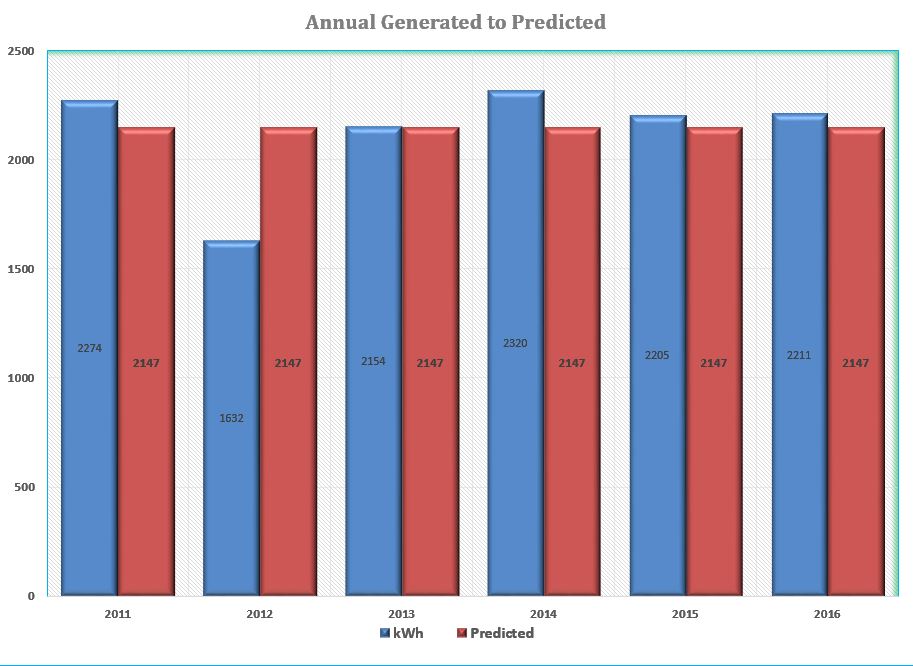 Financially we are about where we should be having received back about half the sum we paid for the panels as Feed-in Tariff payments. A similar PV system would cost about half what we paid now which goes to show how well the FiT worked as a way to make solar popular enough for efficiencies in manufacturing and fitting to bring the price down.

Solar and wind are fantastic resources but now we urgently need affordable, efficient and sustainable ways to store the huge amounts of energy generated at peak so we can smooth out the big seasonal and hourly variations rather than be reliant on coal and gas as back-up generation. Fortunately firms like Tesla are ploughing resources into developing viable battery type local storage systems. We also need large scale grid systems though and there is little sign of our government investing meaningful sums in researching new large scale storage or even duplicating existing methods such the pumped water system that has been in use for 30 years at ‘Electric Mountain’.