Apart from the return of a slight PF nag since the Watlington Skyline I’ve been feeling pretty good with my shoulder, while still not very mobile, hardly complaining at all. So I thought I’d try for a seasons best at the Eynsham 10k, not a lot to ask being as the best I’d managed so far this year was something like 52:30. I ran 48:33 at Eynsham last year and 47:48 the year before but that was then and it’s going to take a lot more training to get back there. So 52 minutes works out about 8:15 minute miles, achievable but only if nothing started hurting and I didn’t throw up!

I cycled out, over 9 miles, the furthest I’ve cycled since April I think. Last year there was flooding and the Thames had spilled over under Swinford Toll Bridge but this year just a bit breezy and chilly but really not a bad day for a race.

Leaving home just before 9am got me there in plenty of time to pick up my chip, chat to local runners and peel off my outer layers. A chap approached and introduced himself as Dean Miller, a recently joined Vegan Runners UK member. He wasn’t running due to injury but his vegan partner Jackie was. I also ran into another vegan from my neighborhood, Lynne, who was meeting up with members of her running group for the race. So I felt in good company.

We wandered round to the start then bang on 10:30 we were off. Chip to chip timing so I started not far from the back. A shout from Dean who was taking photos – then another from VRUK’s Maria who was unexpectedly supporting along with John and their dogs. The start being a bit downhill I tried not to get carried away but still passed a good many runners completing the first mile in under 8 minutes. 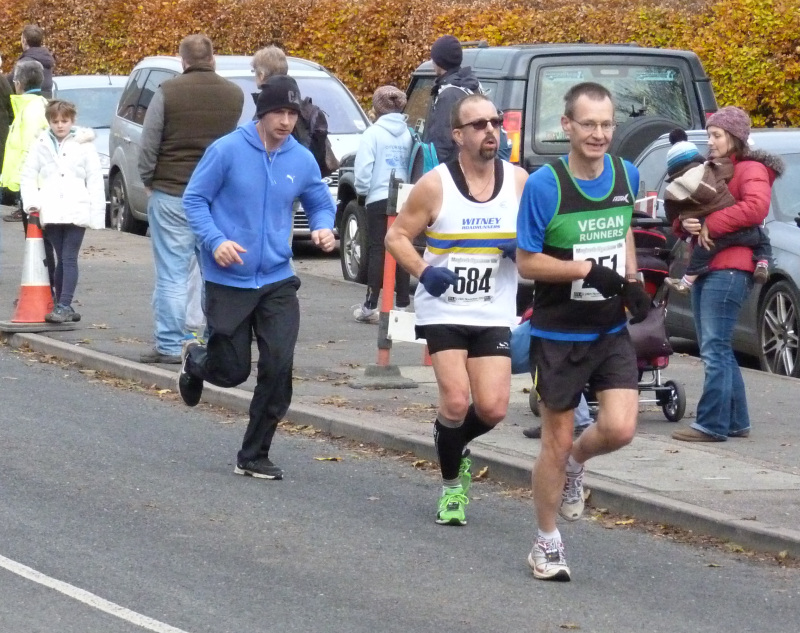 I eased down to target pace for mile 2 only to feel my right shoe loosening and looked down to spot not one but both laces coming undone. Too far to go to leave them like that so lost about 20 seconds pulling out of the fray to re-tie and tuck in properly – I had been chatting when I put my shoes back on after removing my cycling longs and had obviously done a bad job of them.

The course is 2 laps almost right round Eynsham so a gentle headwind then a very slight climb up to and along the A40 path then left back into Eynsham to go round again. I held my pace and passed a good many runners though did have to ease a bit during mile 5 as breakfast threatened to make a return visit. I was going to get my season best but was glad I wasn’t trying for sub-50 as I don’t have it in me quite yet. 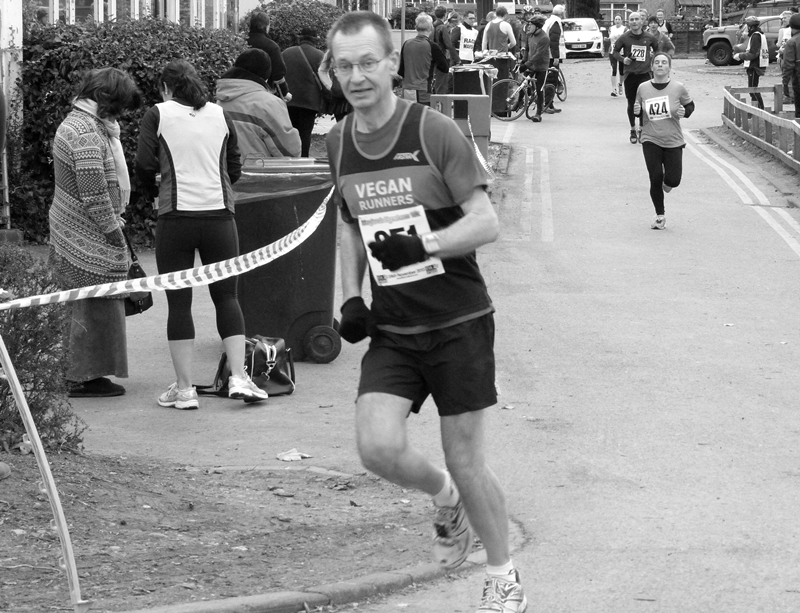 We were marshalled left off the road, past the school race HQ, then onto the finish field where Dean waited with camera. I realised a last push would get me under 52 minutes on the finish clock so easily under on the chip – I went for it and just scraped in. A happy but rather achy ride back to Oxford and the results were up before the day was out. 51:17 394th of 588 runners. Slowest time to date at Eynsham but still pleased as I do feel I’m starting to move back in the right direction 🙂