We took a trip out to Wendover Woods on Saturday 15th so I could make a fool of myself at another orienteering event. This was another in the Thames Valley Orienteering Club’s Saturday Series where I suspect they make allowances for the inexperienced and foolhardy. I opted for the ‘light green’ course again – navigationally challenging but not as long as the ‘green’.

I registered and collected my map and emit card, proceeding to the start control without peeking at the map so I could feel I’d done it properly. Bipped my emit on the start then located control number 1 on the map and, even though it wasn’t far away, carefully aligned the compass for direction and off I went. The paths didn’t seem to be in the right place and the clearing I was looking for wasn’t evident. I arrived at the ‘Go Ape’ activity area yet I thought the blurb said we weren’t to go in there. Retraced and had an experimental detour into the woods to no avail. This wasn’t going well!

I headed back to the start and from there just followed the paths and land features ignoring the compass, the penny dropped and I realised I’d aligned the compass in the wrong direction and had been heading north instead of south. So over 13 minutes to find the first control and my confidence somewhat dented.

Getting my act together I made good progress for the next 10 controls, checking the terrain on the map and navigating the longer route along paths if it looked difficult or using the map and going direct where white or light green suggested I could run. Number 10 was tricky but it was well hidden and there were various other people who also appeared to be puzzled. Number 11 was tough as – despite going the path route – the little, tapering-out, path I was looking for just wasn’t there and I eventually found the control after 13 minutes using the stumbling about in the undergrowth approach. Over an hour gone and still 5 controls to find, I wasn’t going to make my appointment with Jane in the cafe! 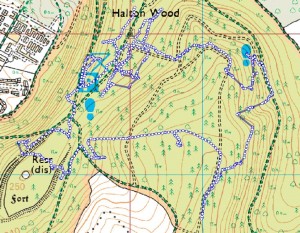 12 and 13 were not a problem and 14 appeared to be a case of follow the wide track up the hill then take the first wide track on the left only I didn’t see said track and ended up at the top near the start. Having obviously overshot I decided to follow the top track then drop back down but the path back down didn’t seem to be there. I looked carefully at the map and realised I’d gone way too far and retraced then back down the wide track and on my right I spotted a disused forestry track with a tree down across its entrance. Clambered over the tree, then another one not far down the track which was quite big and I more fell off than climbed over. Then another! Time to admit defeat I thought and turned uphill to where I spied a narrow track that would surely take me back to the top near the start. On my right were a couple of pits which was what I was supposed to be looking for so I thought it worth a quick check and there was number 14, a bit over 21 minutes that had taken.

So revitalised I ran up the top, found 15 and the nearby finish and bumped into Jane returning from the cafe having fortunately remembered to get another pay and display ticket for the car. 1 hour 42 minutes, 21st out of 24 starters and 22 finishers. Not very good at all but I thought I’d dealt with most of the controls efficiently, it was just the cock -up at the start and the extended hunt for 2 of the 16 that had slowed me so much. I think there is hope for me yet and looking forward to the next one.

Jane meanwhile had finished 20th out of 35 starters on the yellow course and even beaten 2 grown-ups (though they may well have been escorting youngsters so she’s not let it go to her head.)